New figures released by the Ministry of Housing, Communities and Local Government last week have revealed that office to residential permitted development applications have fallen by more than a fifth in the past year signifying a drying up of attractive redevelopment opportunities, observers say.

In the second quarter of this year, just 511 office to residential prior approval applications were submitted, representing a 22% fall on the same period in 2017. Moreover, it was the lowest quarterly figure since the government started collating the metric in April 2014.

The private sector and planning officers say that, after five years of permitted development (PD) rights allowing such changes of use, there aren’t many offices now suitable for conversion in the right locations. “The obvious explanation is that it’s a limited seam to mine and when they’ve gone they’ve gone,” said Hugh Ellis, interim chief executive at the Town and Country Planning Association. Or, as Mike Kiely, chair of the Planning Officers Society, put it: “The easy, attractive ones have been done and the supply of sites and buildings is drying up. What’s left are in areas that don’t interest developers.”

From the private sector perspective, Jason Lowes, partner at planning consultancy Rapleys, agreed. “PD right applications have broadly been on a downward trend since the system was introduced and this is likely to be due to a simple reduction in overall stock availability,” he said. “As the floodgates opened, a large number of initial applications was always likely, as was the subsequent drop off as the most viable sites began to be converted.”

Additionally, in some areas the commercial office market is performing strongly relative to the residential market, thereby making conversions less attractive to developers. The office market has seen a slight resurgence of late and that is possibly because of PD. Grant Leggett the director and head of the London business at Boyer Planning, said “If a load of offices in an area have been converted to housing, it creates a supply and demand issue. In certain locations, the value you can get from an office will outstrip the value you can get for residential. It’s just pure economics.”

On the back of this, some local authorities are considering introducing article 4 directions. Hounslow Council has implemented an article 4 direction spurred on by the green light for expansion at Heathrow Airport. “Since the Heathrow expansion got announced, Hounslow is now facing a massive shortage of office space,” said Leggett. “There is more demand for office space, so they’ve brought in an article 4 to try to prevent losing any more offices.” 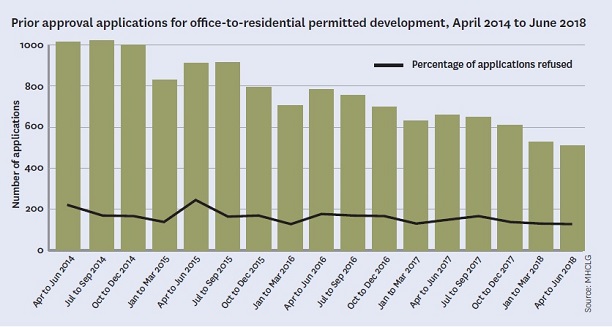